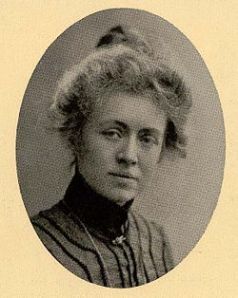 Frida Stéenhoff was a Swedish author living in Sundsvall in central Sweden and in Stockholm. She was well educated, and was a radical liberal advocating female rights and a more free love life, in her novels, plays and pamphlets. In a recent book, Blott ett annat namn för ljus (Just another name for light; 2007), published by the editorial Rosenlarv, her ideas are presented in an essay, a short story, and a play.

She lived between 1865 and 1945, a time when it was not so easy to actually practice these ideals. It is interesting to contrast this with the life just a half century later, of  Tove Jansson and her partner from the 1950’s and on Tuulikki Pietilä (who by the way recently – February 23 – passed away), who were born in 1915 and 1917, respectively. They each separately, and together, managed to live their lives without the restrictions of various kinds that Stéenhoff describes so well in her writing.

Tove Jansson did not need to argue for a free life, instead she could picture the complications of relationships of human life, whether in the Moominvalley or in short stories about the life with Tuulikki.

2 responses to “A free life”